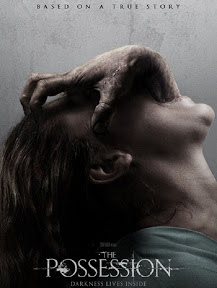 For some ultimate reason, I’ve watched the movie The Possession, because the trailer said Sam Raimi is the producer, and without a doubt, I told myself that it would be a fantastic horror movie. However, it didn’t turn out to be one but at least it was descent.

The movie is about a girl, who bought an antique box at a yard sale and without her knowledge, that box contains the ancient evil spirit that could possess her. This notion is not new anymore, but the movie somehow tried to become effective as new gimmick like ‘fingers trying to come out of the throat’ was introduced (I think it was creepy enough to know that there’s something inside you). Another thing is that, although it’s the common exorcism movie, it still looked differently because the Hebrew concept was added to it. But then again, it lacks everything like character development, filming style and a unique approach.

It says this movie is based on a true story and I think this could be one of the best factors to make it successful, as it would let the audience feel they don’t want to be alone anymore after watching it. The director must have been used this factor including the new tricks to push the idea up to its extent. With that being said, the film could have been exceeded what is expected. I don’t know if it’s just me but the film didn’t actually scare me unlike the other exorcism movies.

I don’t want to make a comparison but to give you an example, the film The Exorcism of Emily Rose is still fresh in my mind and until now, I’m getting paranoid whenever I wake up at 3am in the morning with no reason. Although, it was done in a semi-documentary style of filming, it was effective because it augmented my knowledge as an audience about the exorcism thing based on Emily’s true to life story.

I can still say that this movie is still worth watching but not in the big screen. Hence, it will be a lesson for me as a moviegoer that the best film director may not always contemplate of becoming the best producer as well. I’m not saying that my icon Sam Raimi is an example since he was only one of the fifteen producers of this film. Take note, he’s not even the executive producer! (AAP)

Engr. Aleksandre Pates (a.k.a. Aleks or André) is an I.T. Professional and Electronics Engineer by profession, but it didn’t hinder him to enrich his skills and broaden his experience in theater and literary. He is also a College Instructor/Professor, Playwright, Artistic/Creative Director, Singer, Songwriter/Composer, Resource Speaker/Lecturer of Campus Journalism, Editorial Writing, Creative Writing and Leadership Empowerment for Youth. He is a Palanca Awardee, and he was the Editor-In-Chief of The Philippine Artisan (official student publication of TUP-Manila) from 2003-2007. He is a Certified Oracle Partner Expert since 2010, a Certified Harvard Connected Manager, and a member of the prolific playwright organizations in the Philippines, The WritersBloc. He also holds numerous positions in socio-civic and professional organizations like Institute of Electronics Engineers of the Philippines (IECEP – Manila Chapter), FEU Institute of Technology, and De La Salle Araneta University Alumni Association, Inc.
View all posts by Aleks →
This entry was posted in Films and tagged Antique Box, Director Raimi, Emily Exorcism, Exorcism, Exorcism 2012, Exorcism of Emily Rose, Hebrew, Hebrew Exorcism, Possession, Possession Movie Review, Possession Movie Review 2012, Producer Raimi, Producer Sam Raimi, Raimi, Sam, Sam Raimi, The Exorcism of Emily Rose, The Hebrew Exorcism 2012, The Possession, The Possession 2012, The Possession Movie Review, The Possession Movie Review 2012, Yard Sale. Bookmark the permalink.