When I was a kid and there’s a storm, I always expect for the amazing formation of a rainbow caused by the refraction and reflection of light waves as it passed through the droplets of water. Thus, in one of the story books that I’ve read, I wanted to go at the end of it believing that there’s really a pot of gold. But now all I can see are flooded streets and highways, and lots of relief goods. Environment friendly relief goods that were arranged inside a big box.

From the word itself (relief) which means that it should only be used during emergency. However, we seem to abuse the word, as relief goods are now becoming fad and trending (as twitter connotes) among Filipinos. It’s like majority of us enjoy the moments of preparing it (especially the greedy TRAditional POliticians – TRAPO, where they can campaign at the same time) or receiving these kind of things as if there is almost always someone in need especially those who are living in the flooded area including the informal settlers.

According to an investigative documentary that I’ve watched, the reason of great flooding is due to the use of plastic materials. Hence some are saying it is due to the blocked passages of water ways because of the reconstruction of roads and housings, and consequently there is no alternative for the water to flow but on the streets and highways. But debating whichever causes it doesn’t make sense since both of it already added to its effect; what important now is finding a solution on how to prevent it moving forward.

Not even a typhoon but it was just a monsoon that has flooded most part of the congested city of Metro Manila last August. That month made everyone forgets the memories left by typhoon Ondoy which happened several years ago; the only difference is that many of us are now prepared for a tragedy like this.

“Baha ka lang Pilipino ako!” This quotation uplifted us as a nation. We did see bayanihan during the monsoon; not just the typical bayanihan but the true bayanihan spirit that let us surpassed everything victoriously. As much as I would want to describe every detail of what I’ve witnessed during the tragedy, it would just take me long hours of reminiscing history that for some already considered it as their past repulsion.

The flooding has subsided but its effect has marked the minds of the victims. Yes, it did moreover to children. 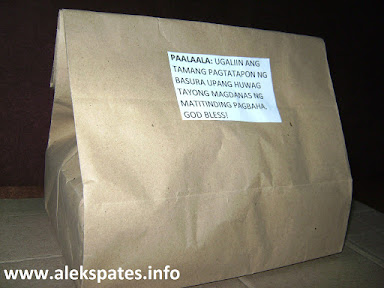 Instead of political ads from the person where it came from, we can put a simple reminder for the victim to become responsible on their values and manners in taking care of our environment.

To assist the victims in putting back the pieces of their lives literally, they were given relief goods: relief goods that would signify for their new hope. But do these things really help them? Perhaps somehow, as the food can fill their tummy and the clothes can comfort them for a while, after that, what happens next? They remain undisciplined by throwing their empty plastic bags and trashes somewhere: in the streets, creeks, and rivers. Anywhere they want as long as they can afford to.

Then when nature strikes back again, they will cry for the consequence and afterwards, expect for another relief good. Seems like a never-ending story between the victims and the volunteers.

THE NEED FOR CHANGE

We already felt the impact of such changes by using paper-like materials in malls and groceries. But will this change for the better? Or will the flooding really stop? Maybe! As many of us think that if we use paper-like materials, it is now safe to throw it anywhere. But then again, it’s another misconception. Some are saying that we opt to use recycled paper as compared to plastic to lessen the pollution. How come!? I don’t think so! According to study it’s much cheaper to recycle plastic against paper since it uses less energy (which means less pollution). Maybe in this debate, they are pertaining to the decomposition of the material: paper decomposes faster than plastic. However, if papers are placed in a very dry climate, it could survive for many hundred years (to state a scenario, people may find old newspapers in the walls of their houses). 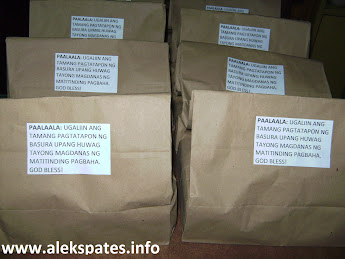 Prevention is better than expectation. We can be prepared for the coming of the tragedy but we can also prevent it from happening.

If I were to choose between paper and plastic, I’d still choose paper. Why? I don’t know, maybe because it’s closer to our nature. In return, I will just ensure the efficient use of every sheet of it. Maybe another reason is that, it doesn’t suffocates or choke any animals when accidentally eaten unlike plastic.

Hence, I suggest that relief goods should be packed accordingly. Since this package contains necessary things, it should be repacked in a paper bag and not plastic. And instead of political ads from the person where it came from, we can put a simple reminder for the victim to become responsible on their values and manners in taking care of our environment. If we really want to give them hope, then this is the best time.

Prevention is better than expectation. Neither the use of paper or plastic could stop the flooding, as long as the people aren’t well-disciplined when it comes to throwing their waste and following the proper recycling.

One may say that the effect in using non-recyclable materials is only minor to us (for now) but if we as human beings don’t do anything to protect our environment, the response of our mother nature could be worse than we ever thought.

It’s better to give than to receive, but it is best to give something that is environment friendly. It doesn’t just aid the person in need but it also encourages them to become an earth warrior. (AAP)

Engr. Aleksandre Pates (a.k.a. Aleks or André) is an I.T. Professional and Electronics Engineer by profession, but it didn’t hinder him to enrich his skills and broaden his experience in theater and literary. He is also a College Instructor/Professor, Playwright, Artistic/Creative Director, Singer, Songwriter/Composer, Resource Speaker/Lecturer of Campus Journalism, Editorial Writing, Creative Writing and Leadership Empowerment for Youth. He is a Palanca Awardee, and he was the Editor-In-Chief of The Philippine Artisan (official student publication of TUP-Manila) from 2003-2007. He is a Certified Oracle Partner Expert since 2010, a Certified Harvard Connected Manager, and a member of the prolific playwright organizations in the Philippines, The WritersBloc. He also holds numerous positions in socio-civic and professional organizations like Institute of Electronics Engineers of the Philippines (IECEP – Manila Chapter), FEU Institute of Technology, and De La Salle Araneta University Alumni Association, Inc.
View all posts by Aleks →
This entry was posted in Publication and tagged August 2012, August 2012 Tragedy, Baha ka lang Pilipino ako, Bayanihan, Environment, Filipinos, flooding, Green Movement, Manila flood, Manila flooding, Marikina, Metro Manila, Metro Manila tragedy, Milenyo, Monsoon, Ondoy, Paper, Philippine Politics, Philippines, Pilipinas, Plastic, Pollution, Recycling, Relief, Relief Good, Relief Goods, Sakuna, The Ideal Packaging, The Ideal Packaging of Relief Goods, Traditional Politician, TRAPO, Waste. Bookmark the permalink.