Battleship: The Battle for the Unknown

When we say sci-fi, we are thinking of an event that could possibly happen to Earth in the far future (I don’t say near future since I consider that ‘near’ today). Aside from high-end technologies, every notion to aliens, invaders and UFO always coincide with future: whether it impacts humans in a good or bad way; unlike the film Indiana Jones and the Kingdom of the Crystal Skull where the aliens were part of history. Thus the question will always be, “are we ready if that happens?” 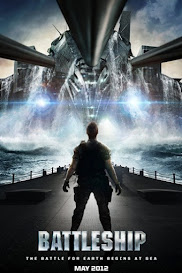 This is what the film Battleship tells us. In fact, it’s not new anymore because we have already seen this kind of plot in the past blockbuster movies like Independence Day, The Day After Tomorrow, etc. One factor that I somehow don’t like about this movie is that, it is so predictable (like any other sci-fi) making it boring to watch. Aside from being predictable, I just don’t understand why the ‘The Regents’ (aliens) were battling humans where in fact, it was the humans who have sent the message first outside the Earth and for some reason, no one knew how ‘The Regents’ perceived that message which led them to attack our planet and in return, fighting back for no other reason except for survival.

About the castings, I’m okay with how they play each role. Among the major characters are Taylor Kitsch (known for the movie John Carter) as Lieutenant Alex Hopper, Brooklyn Decker as the leading lady Samantha Shane, Liam Neeson (The A-Team, Taken and Wrath of the Titans) as Admiral Shane, Alexander Skarsgård as Commander Stone Hopper and Rihanna as the Petty Officer Cora ‘Weps’ Raikes.

This is a debut movie for Rihanna as part of the major casts (we’ve already seen her in Bring It On: All or Nothing) and her acting is just acceptable. She maybe a Grammy Award winner but with Battleship, one can witness as well her acting prowess. While watching her in the movie, I think the Officer Raike’s character is more appropriate for someone who used to do action jam-packed scenes, like Michelle Rodriguez (Resident Evil part 1, Avatar).

I don’t know if it’s just me, but the effects that have been used in the film were similar to that of the Transformers (I even anticipated either for Optimus Prime or Megatron to appear – forgetting that it’s another movie). The sound effects were also pretty much synonymous especially when the aliens’ battleship was in motion. Let’s just accept it, the maker of this movie is the same company that brought us the Transformers.

I understand why the story is very simple and predictable because it is only based on the classic Hasbro naval combat game. But I would think that it would be more interesting if they injected a twist on how the alien ‘thing’ tries to invade the Earth. Since the producer already invested to its awesome effects, why not invest on the script itself. The visual arts can be elegant to the audience eyes, but it’s the content that matters most, making the movie memorable after all. (AAP)

Engr. Aleksandre Pates (a.k.a. Aleks or André) is an I.T. Professional and Electronics Engineer by profession, but it didn’t hinder him to enrich his skills and broaden his experience in theater and literary. He is also a College Instructor/Professor, Playwright, Artistic/Creative Director, Singer, Songwriter/Composer, Resource Speaker/Lecturer of Campus Journalism, Editorial Writing, Creative Writing and Leadership Empowerment for Youth. He is a Palanca Awardee, and he was the Editor-In-Chief of The Philippine Artisan (official student publication of TUP-Manila) from 2003-2007. He is a Certified Oracle Partner Expert since 2010, a Certified Harvard Connected Manager, and a member of the prolific playwright organizations in the Philippines, The WritersBloc. He also holds numerous positions in socio-civic and professional organizations like Institute of Electronics Engineers of the Philippines (IECEP – Manila Chapter), FEU Institute of Technology, and De La Salle Araneta University Alumni Association, Inc.
View all posts by Aleks →
This entry was posted in Films and tagged Alexander Skarsgård as Commander Stone Hopper and Rihanna as the Petty Officer Cora ‘Weps’ Raikes, Battleship 2012, Battleship Film, Battleship Movie Review, Brooklyn Decker as the leading lady Samantha Shane, Grammy, Liam Neeson (The A-Team, Rihanna, Taken and Wrath of the Titans) as Admiral Shane, Taylor Kitsch (known for the movie John Carter) as Lieutenant Alex Hopper. Bookmark the permalink.