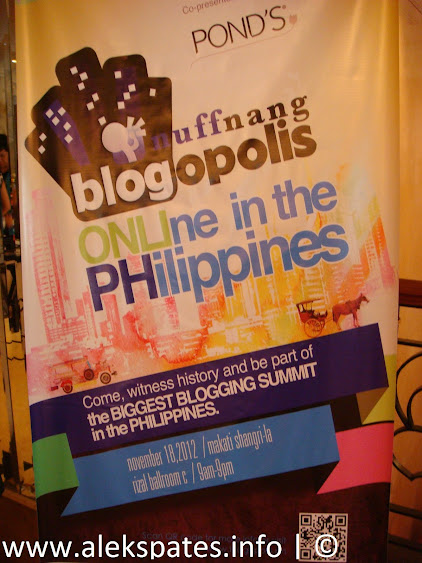 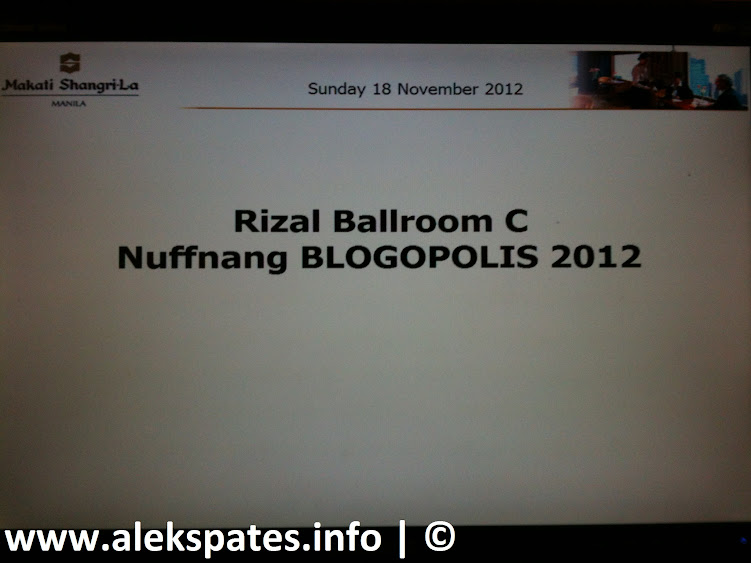 So far, this was the biggest blogging event for the bloggers and by the bloggers wherein the participants came from different parts of the country. Aside from that, what made this event truly successful was due to the presence of the reputable speakers not just in the blogging industry but also in mass media.

The registration started at around 9:00am and the participants, who were mostly bloggers, were able to get their respective conference kits and IDs. Since this was a blogging event, the organizers were able to provide a fresh concept of the conference’s ID in which the social networking accounts of the participants were synchronously updated everytime the IDs were being tapped in the system. Quiet interesting, huh!? 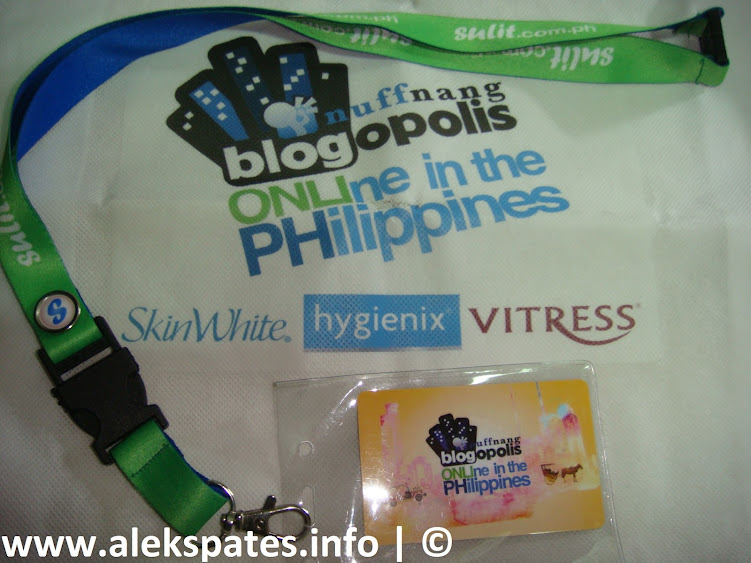 After the registration, Mr. Chuckie Dreyfus hosted and graced the morning session. He introduced Mr. Abe Olandres (@abeolandres), a professional blogger since 2005 and the owner of YugaTech website, to initially discuss the topic entitled The Philippine Blogosphere: Past, Present and Future. 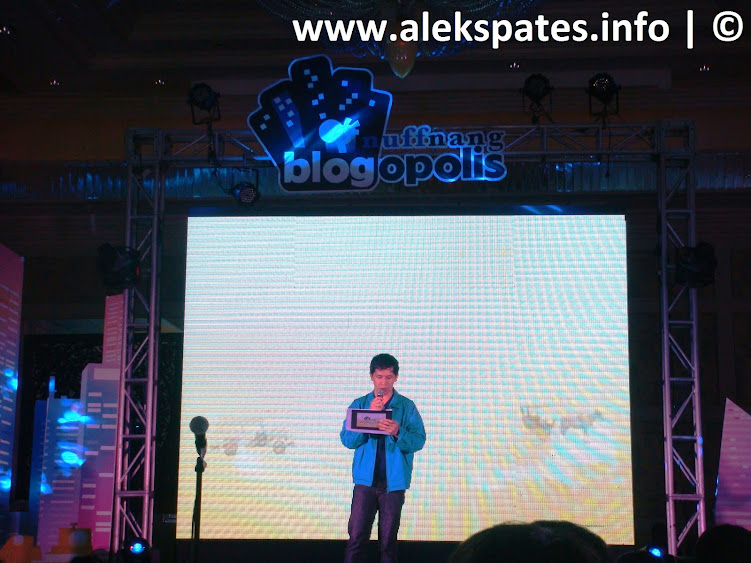 Not just an actor but for those who don’t know, Chuckie Dreyfus is also a blogger.

For the first keynote speaker, Mr. Manuel L. Quezon III has shared his views on the topic The Role of Social Media in E-Governance; with Noemi Dado and Jane Uymatiao as panellists. Mr. Manolo (his nickname) Quezon III was able to present his ideas on the current social media strategies and key issues like how social media empowers individuals and develops new leaders, and how will social media create more civil virtue due to its public nature. 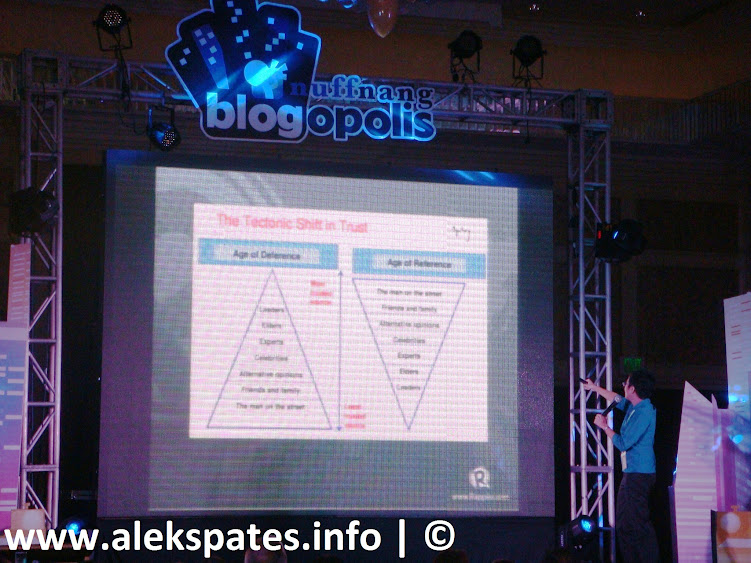 Ms. Maria A. Ressa points at her presentation while sharing her expertise as a journalist.

Meanwhile, Ms. Maria A. Ressa, a professional Filipino Journalist who worked as the head of ABS-CBN News and Current Affairs Department and Cable News Network (CNN) for nearly two decades, CEO of Rappler and author of Seeds of Terror (a book published by Free Press that contains blow-by-blow account of the hideouts of Al-Qaeda in Asia) served as the second keynote speaker for the topic From Offline to Online with Ellen Tordesillas as the panelist. Ms. Ressa told the participants that to be an effective blogger; one has to consider these three important things when writing: Credibility, Standards and Ethics. 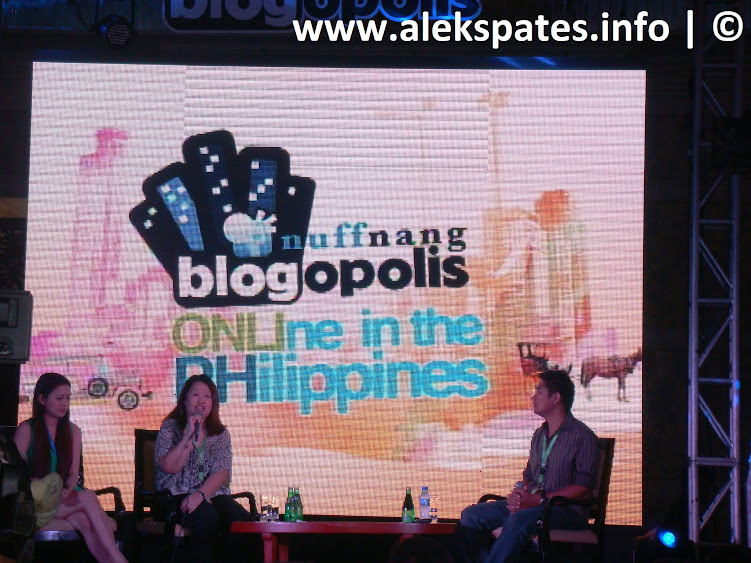 Ms. Divine Lee was supposed to be the next speaker but since she’s not available during that time, Mr. Jinoe Gavan of takbo.ph on the other hand shared his expertise on how bloggers should engage and interact with their audience or readers. He said that content is the King and this is one of the factors to attract readers. He also mentioned that a blogger should always have a fresh idea to write about: either coming from a hot question or asking a suggestion for the next topic.

Currently, since the Marketing industry is seeing social media as their partners when it comes to reaching out to their customers, Mr. Liam Capati, media director of Starcom MediaVest Group, was able to share what factors that the brand is looking for before they advertise in someone’s blog. He emphasized that the content quality and high traffic are the two important things to consider. 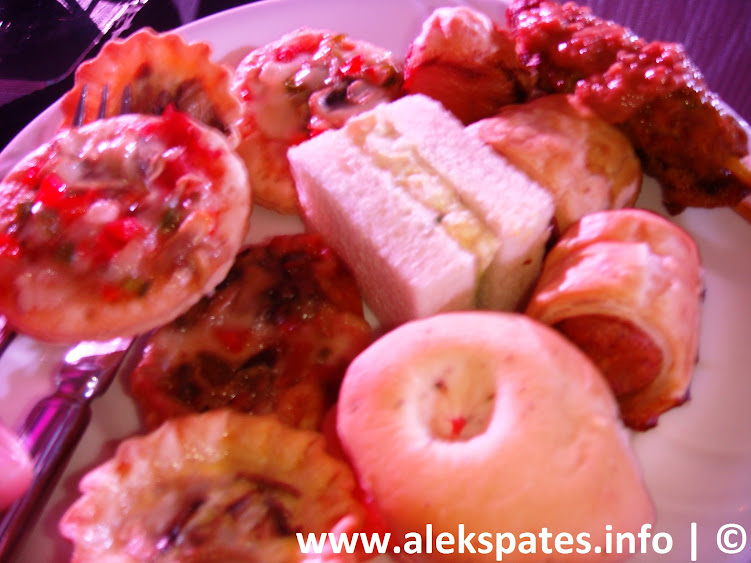 A rare bunch of lunch. Varieties of munchies on my plate during lunch time. 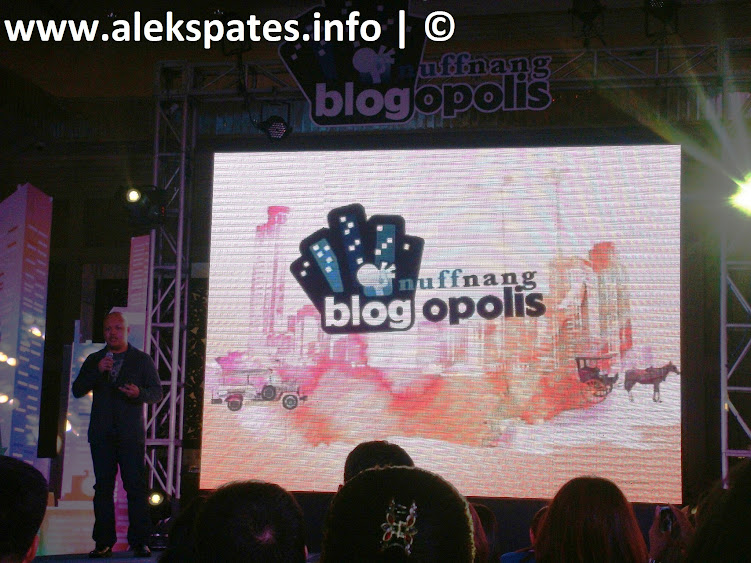 Did you know that Mr. Abe Olandres is the co-founder of the Philippine Blog Awards in 2007?

During the afternoon session, Mr. Olandres, the first speaker of this year’s Blogopolis, also gave hints and advice to the bloggers on how to take their own blogs to the next level. He said that a blogger should treat blogging as a business. In his presentation, he mentioned that blogging is similar to the centuries-old publishing business where blogger needs to take on bigger roles as Publisher. He further shared his insights of successful blogging since based on his own experience; he was able to grow YugaTech single-handedly for the last 7 years. 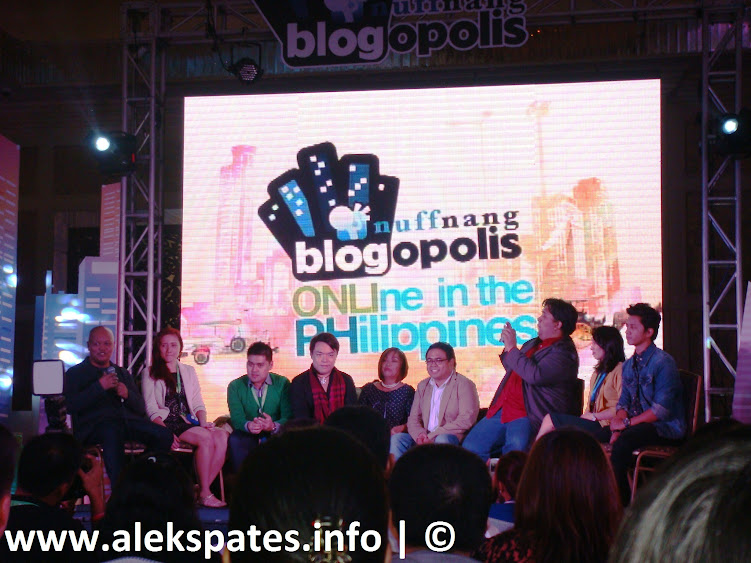 These are some of the lines that I got from the panelists when they have shared their point of views during the discussion:

“… One should know how to practice deadma…” – Mic Lim

“Just write and write from your heart…” – Christine Dychiao

“It’s not about you, it’s what the readers could get from you…” – Noemi Dado 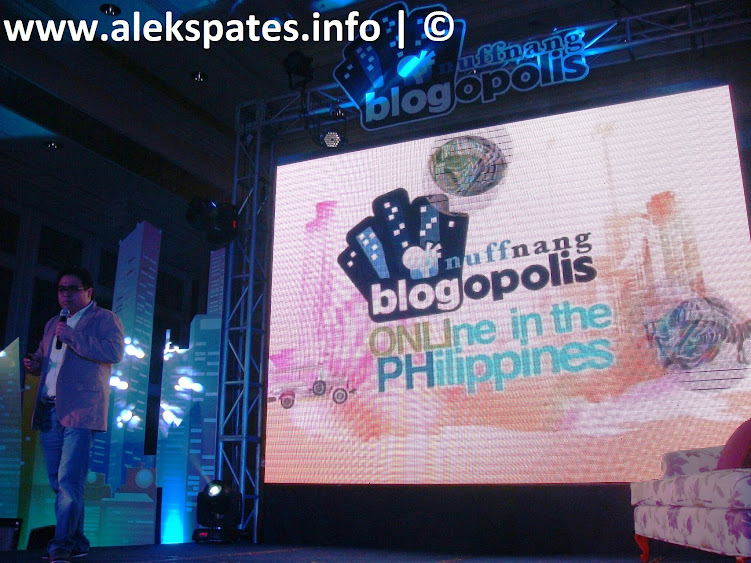 Ivan Henares said that according to the statistics, the Philippines ranked 8th place among the countries with most number of Facebook users. (source: Singapore Management University) 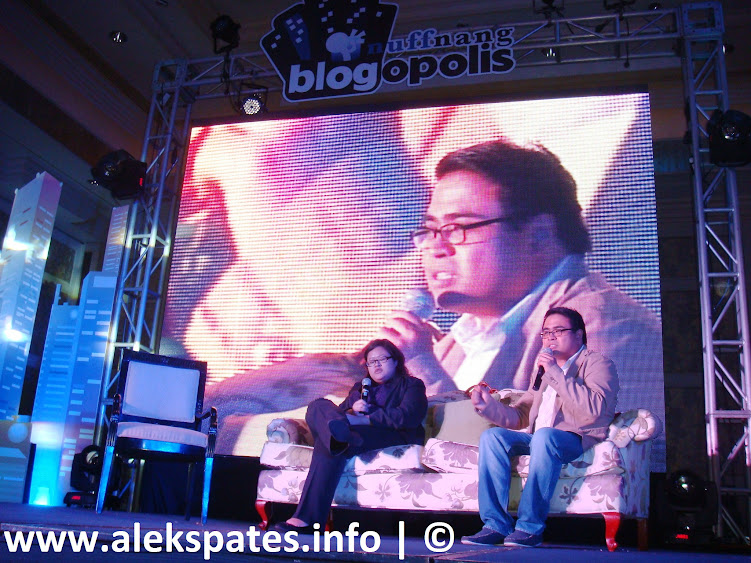 Ivan Henares and Nina Fuentes on the hot seats during the panel discussion.

Since there were lots of interesting topics to be discussed, Blogopolis 2012 was separated into two breakout sessions A and B. I have attended Breakout Session B and it covered topics such as Blogging: More Fun in the Philippines (speaker: Ivan Henares / panel: Nina Fuentes), Social Media and Other Platforms (speaker: Carlo Ople / panel: Victor Basa), and Challenges of Cybercrime Prevention Law (speaker: Atty. Francis Rivera / panellist: Noemi Dado and Jane Uymatiao). 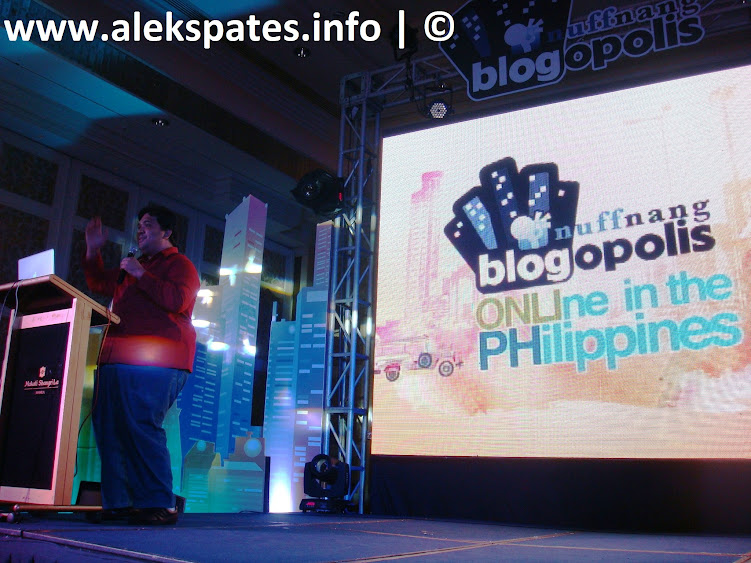 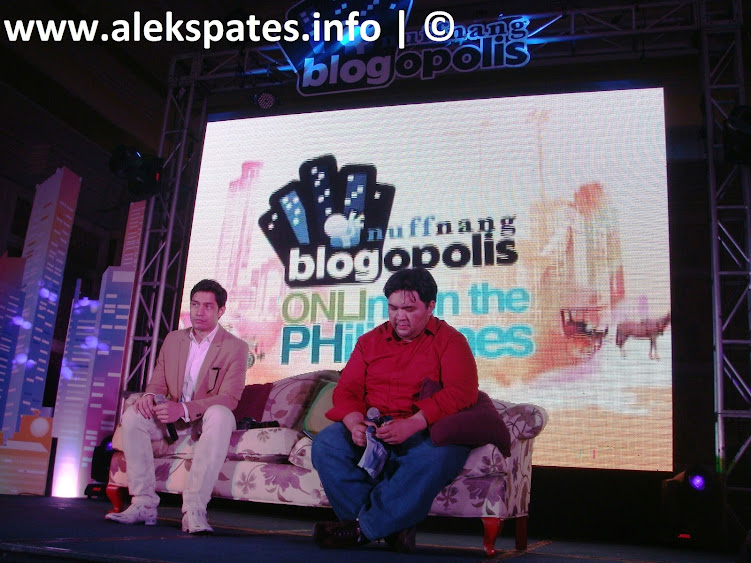 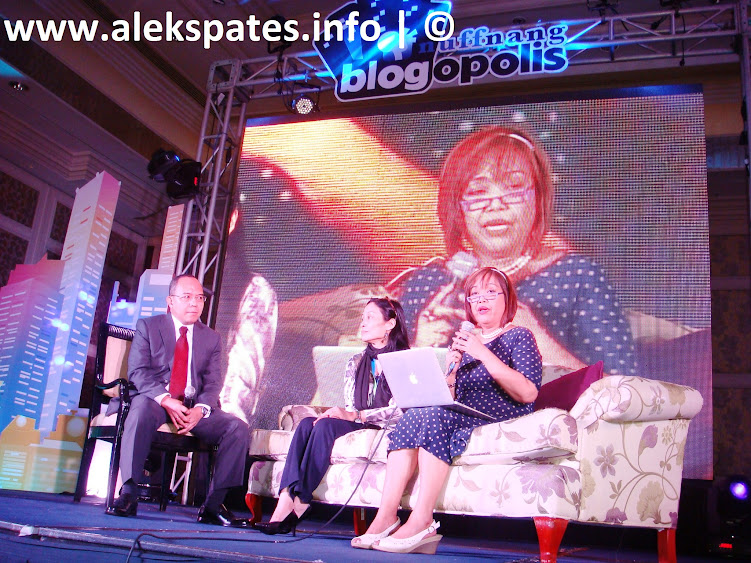 ’Can I be sued with my blog?’ From left to right: Atty. Francis Rivera, Jane Uymatiao and Noemi Dado during the panel discussion. 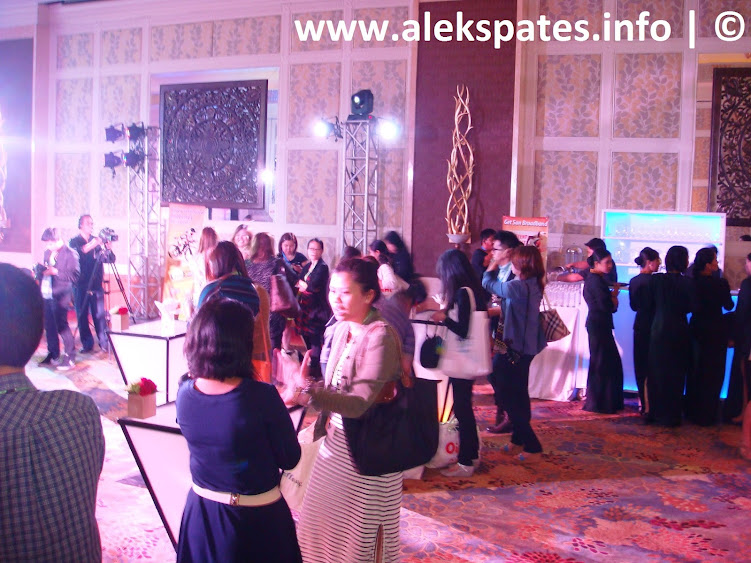 Time to relax and socialize! Participants during the Networking Night.

Was the free-flowing of beverages present in the event? Of course, yes! After the productive discussion of essential topics in the four corners of Makati Shangri-La’s Ballroom, a Networking Night was then followed where the participants and speakers socialized with each other. Mr. Johnoy Danao, an indie musician/performer and the voice behind the latest music video commercial of Skin White, was also present during the night. He rendered the audience series of acoustic songs. 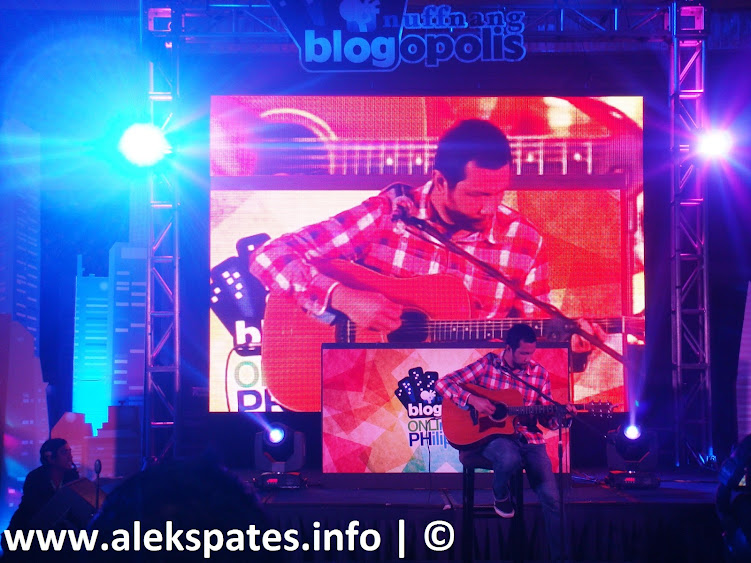 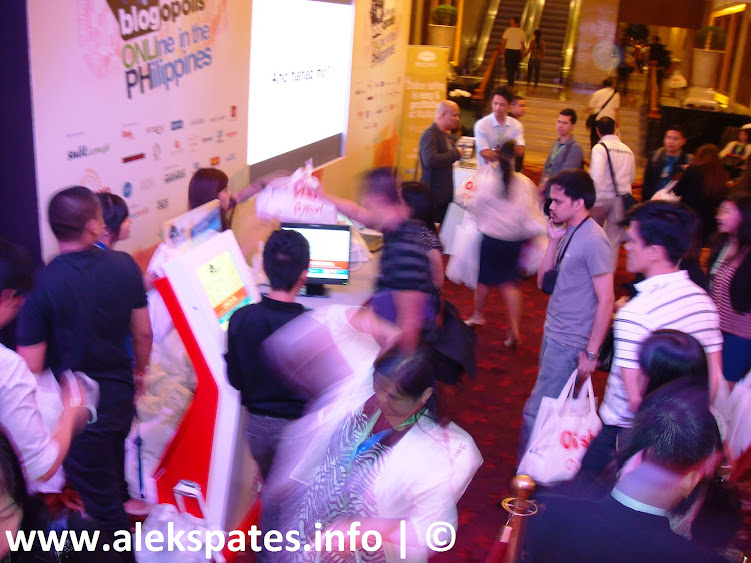 Participants lined up at the registration area to claim their additional freebies.

As a participant, the question that keeps on boggling in my mind is that “could bloggers become threat to journalists someday?” Since one of the speakers has mentioned that based on the survey, 61% of PH Internet users trust consumer opinion posted online and it doesn’t matter whether it’s truth or lie / positive or negative. Well maybe! Due to the vast evolution of social media, I believe that bloggers are now the hybrid virtual journalists in the making and they could be the key players of the virtual world. (AAP)