Looking back a year ago, I could probably say that I have experienced the luck of living the life to the fullest. When I say living to the fullest, it doesn’t mean you need to have lots of money to enjoy it. As the saying goes “Money can’t buy happiness!”

From what I have experienced, I can robustly say that I am very lucky that God has given me this life to enjoy. For now, I have a better understanding how precious our lives are. Let me share with you the rewarding memorable events of my 2012. 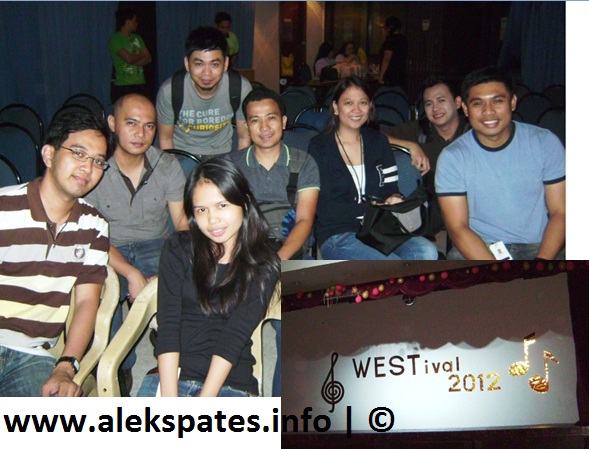 This was a remarkable month for the West EIT Department because it’s the first time for the department to join the West Idol in which I am the representative. I landed 6th out of the 12th contestants.

It’s not just the start of the ordinary calendar year, but it is the same year that my Dad turned 72. He is quite old enough but thanks to the Lord because he is still strong and healthy at his age. Every New Year is memorable to our family because we are celebrating it with the extended new family members. 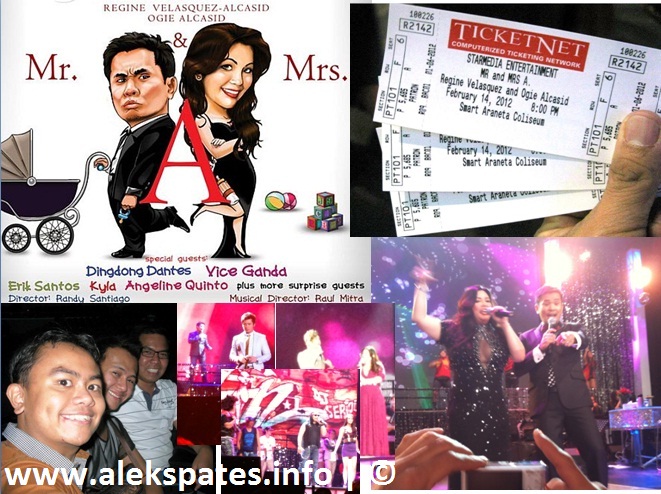 It was my third time to watch my idol, Regine Velasquez-Alcasid in a concert. It was held at the Smart Araneta Coliseum. This time, she was with her husband, Ogie Alcasid, and she has once again proved that she is still the best belter in the Philippine music industry. 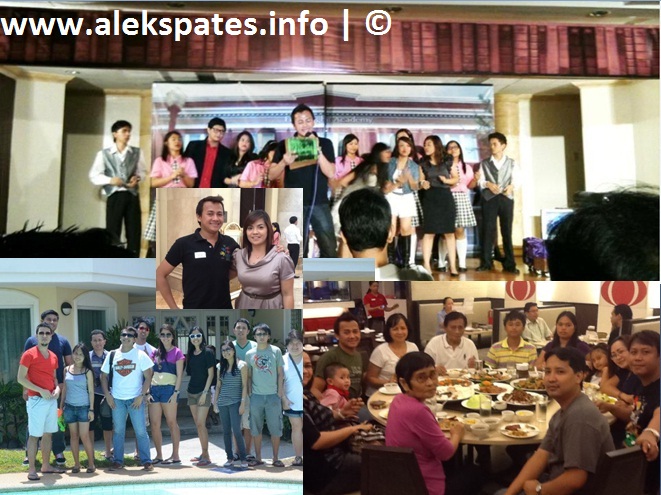 God gave me a talent that I know He would like me to share with everyone. This month marked the 4th season of the theatre group, Dulaang La Salle Araneta Ensemble (DLSAE). The group had presented 10 shows of my first full-length English musical play entitled “A is E for Laila.” I’m proud to say that I got positive feedbacks from the audience of the play.

We also celebrated my Mama’s 60th birthday this month which concluded her dual citizenship as a Filipino citizen and as a Senior citizen.

It was also this month that I’ve organized the summer overnight outing of West EIT Corporation held at Padi sa Morong, Bataan.

To add to the overflowing productivity of this month, I was able to attend as well the Oracle Day 2012 event held at The Peninsula Manila Hotel where I met my former trainer in PeopleSoft, Ms. Liz Anosa. 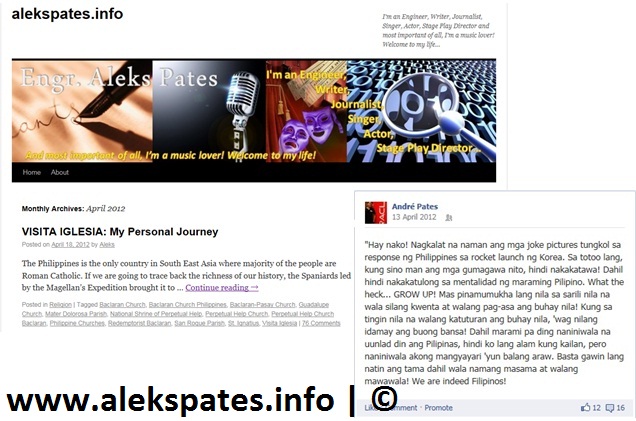 The Philippines was threatened by North Korea’s test rocket launch. I posted a status that bashed those Filipinos who made fun of the situation showing the Philippines as a poor and unstable country with lacks of national defense and security.

Also, this was the month of my remarkable Visita Iglesia where I visited seven new churches around Metro Manila. This was memorable for me because it took me 8 straight hours to complete the said activity. Take note, I’ve done this activity after my regular night shift from the office. 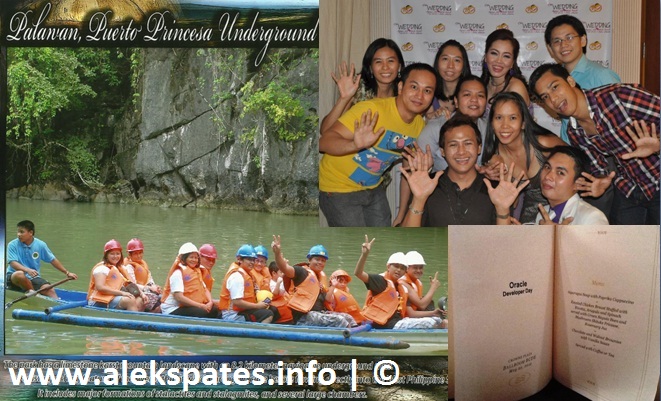 It was Ayreen and Mac-mac’s wedding on the Labor Day itself. I have rendered them the song, Hanggang as popularized by Wency Cornejo.

It was a memorable day for our family as well, where we had our first family vacation trip at Puerto Princesa, Palawan. We toured around the place and we visited the new seven wonder of the world: The Puerto Princesa Underground River”

It was my second time for year 2012 to attend an Oracle Developer Day event held at the Crowne Plaza Hotel. 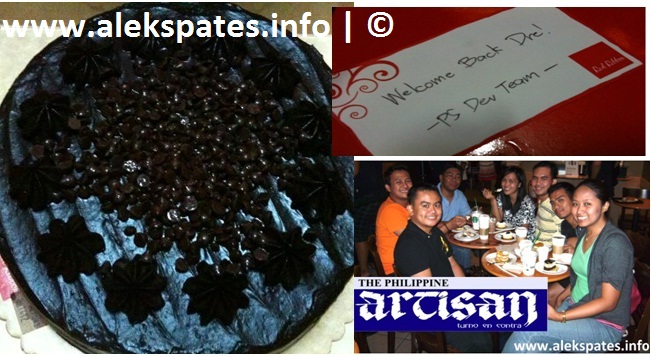 I got hospitalized due to the Malaria-like flu. I was confined at the hospital for a week. Unfortunately, I have missed my worked and other activities especially the wedding gig at Baguio due to hospitalization. But it’s nice to be back because my team, PS Dev has given me a delicious cake.

PA Circa 2001-2007 has reunited. Despite their busy schedules and after five longing years out of the campus, the six editors and a senior staffer of The Philippine Artisan (PA) – Manila circa 2001-2007 have finally met for a mini yet meaningful reunion at the Mall of Asia. 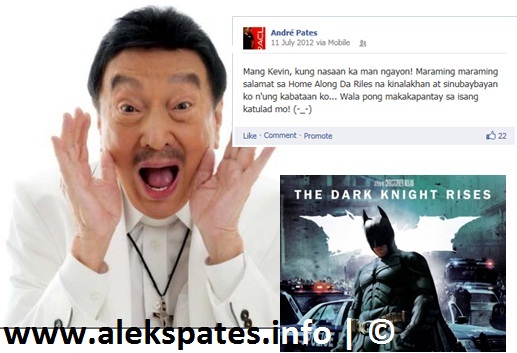 The Philippines mourned altogether because Dolphy who is considered to be the King of Philippine Comedy passed away.

Our company, West Corporation, has started the Movie Night activity through the help of the SIM committee. We enjoyed watching, The Dark Knight Rises. 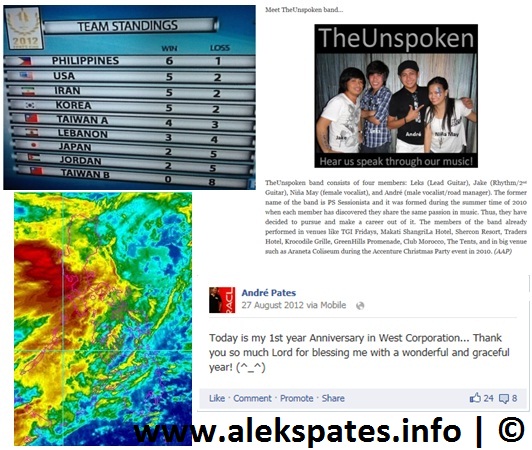 The Philippines was hit by the monsoon tragedy thus I’ve written and posted an article entitled, The Ideal Packaging, which is about the environment friendly packaging of relief goods. Also, I’ve watched the Team Philippines (Smart Gilas) during the 34th William Jones’ Cup wherein they have been declared as Champion beating all the other countries who participated. I’ve also written an article about our acoustic band, TheUnspoken, in my official blogsite. 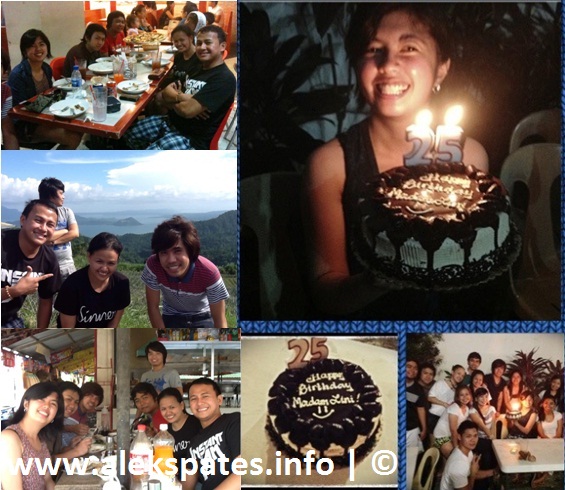 It was Lynette’s Birthday held in Los Banos, Laguna. Before we went home, Lynette and TheUnspoken acoustic band members have had their road trips along Tagaytay and Alabang Town Center. 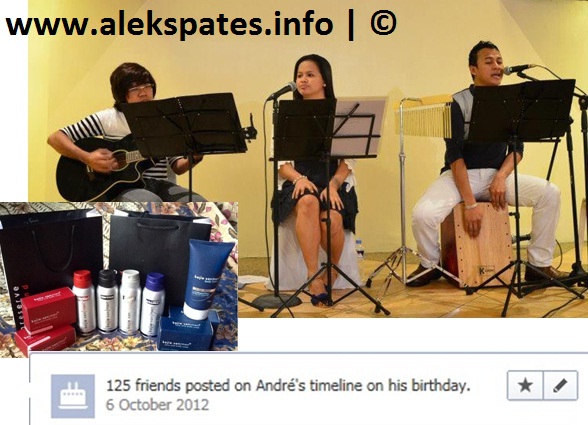 On this special day, I have received 125 birthday greetings in facebook. I was also given the privilege to attend the Kojie.san Men product launching at Seventh High, Bonifacio High Street since my blog has been chosen by Nuffnang as one of the best blogs for my article about preserving mankind.

My acoustic band, TheUnspoken also had the 1st wedding gig held at Oasis Pavilion. Unfortunately, there were only three of us who performed during Iren and Carlo Chuawee’s wedding. 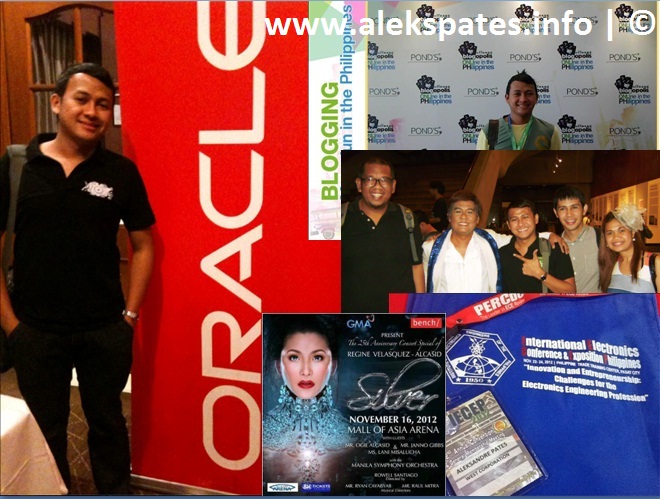 I’ve attended the 4th National Theatre Festival at the CCP Complex. It was a superb performance to the casts of Stageshow in which one of the casts is my mentor, Rody Vera. I’ve also attended IECEP’s Annual General Membership meeting held at the Philippine Trade and Training Center.

It was my third time to attend an Oracle event and this time, it held at Intercontinental Hotel. The topics that have been discussed were Cloud Computing and Big Data.

Also, I’ve attended the first ever conference for bloggers in the Philippines captioned as Blogopolis 2012. It was hosted by Nuffnang Philippines held at Makati ShangriLa Hotel.

It was this month that I joined a networking company, Frontrow Enterprise. I joined because their products, Anti-Oxidants and Supplements speak for its results.

November became memorable and emotional not just to me but to all the fans of the one and only songbird because Regine Velasquez-Alcasid lost her voice during her Silver concert at the MOA Arena. 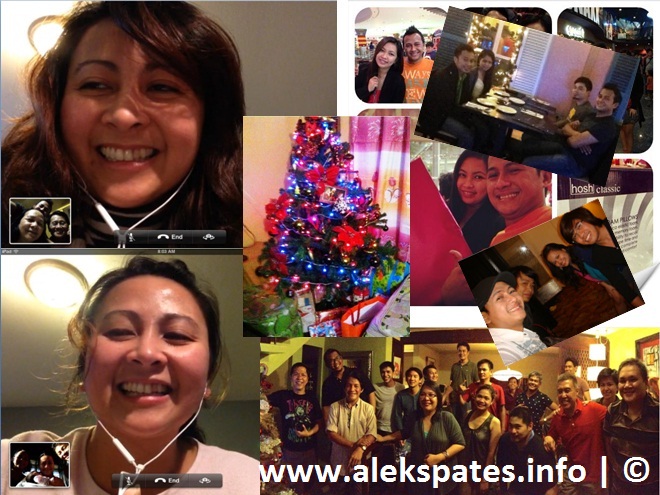 TheUnspoken acoustic band was so blessed to have another gig held at Vivere Hotel, Alabang. This time, we serenaded Atty. Noli Panganiban on his 75th Birthday.

This month also marked the month with most numbers of facetime activity with my beautiful sister in Vancouver, Canada. We really miss her very much. Since this was a holiday season, I was able to attend five Christmas Parties from different groups: our team, our internal department, our external department, Writersbloc for my playwrighting organization, and IECEP Manila Chapter for the Electronics Engineers.

On Christmas day, I had a fun-filled movie marathon experience with my bestfriend, wherein we watched 3-out of the 8 Metro Manila Filmfest entries namely, One More Try, Si Agimat, and Sisterakas. 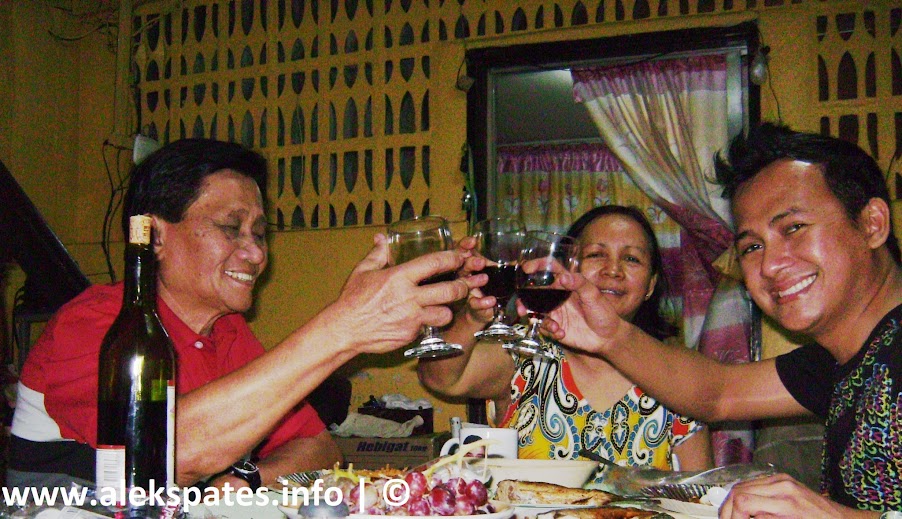 And lastly, we celebrated New Year 2013 with only three of us in our home: my Mama, my Daddy and me – A toast to the challenges of the family. Our New Year celebration for this year was quite unusual because we normally celebrate it with all the members of the family.

I believe in God! Yes, perhaps He is the one guiding us in all the challenges that we encounter. But if the time comes that we feel the pain and struggles, don’t get mad at Him, for He is just doing it to balance your life for your own sake. I do believe in destiny, perhaps it’s the decision that we make everyday. Thank you for being part of my blissful 2012. Hope our paths would cross again in the coming years! (AAP)

Engr. Aleksandre Pates (a.k.a. Aleks or André) is an I.T. Professional and Electronics Engineer by profession, but it didn’t hinder him to enrich his skills and broaden his experience in theater and literary. He is also a College Instructor/Professor, Playwright, Artistic/Creative Director, Singer, Songwriter/Composer, Resource Speaker/Lecturer of Campus Journalism, Editorial Writing, Creative Writing and Leadership Empowerment for Youth. He is a Palanca Awardee, and he was the Editor-In-Chief of The Philippine Artisan (official student publication of TUP-Manila) from 2003-2007. He is a Certified Oracle Partner Expert since 2010, a Certified Harvard Connected Manager, and a member of the prolific playwright organizations in the Philippines, The WritersBloc. He also holds numerous positions in socio-civic and professional organizations like Institute of Electronics Engineers of the Philippines (IECEP – Manila Chapter), FEU Institute of Technology, and De La Salle Araneta University Alumni Association, Inc.
View all posts by Aleks →
This entry was posted in Publication and tagged 125 birthday greetings in facebook, 1st wedding gig of my acoustic band TheUnspoken at Oasis Pavilion - Iren and Carlo Chuawee’s wedding, 4th National Theatre Festival at the CCP Complex, 8 Metro Manila Filmfest movies namely, A is E for Laila, Alabang, and Sisterakas, Anti-Oxidants and Supplements speak for its results, Atty. Noli Panganiban at his 75th Birthday, Ayreen and Mac-mac’s wedding, Bataan, Blogopolis 2012, Bonifacio High Street, Dolphy - the King of Philippine Comedy deceased, Dulaang La Salle Araneta Ensemble (DLSAE), First family vacation trip at Puerto Princesa, Flashback 2012, Frontrow Enterprise. I joined because their products, IECEP’s Annual General Membership meeting 2012 at the Philippine Trade and Training Center, Kojie.san Men product launching at Seventh High, Lynette’s Birthday held in Los Banos Laguna, Mama’s 60th birthday, Mr. and Mrs. A – Regine Velasquez-Alcasid and Ogie Alcasid’s Valentines Concert, My self review 2012, New Year 2013 with only three of us in our home: my Mama and Daddy, North Korea’s test rocket launch, Nuffnang Philippines at Makati ShangriLa Hotel, One More Try, Oracle Day 2012 at The Peninsula Manila Hotel, Oracle event 2012 at Intercontinental Hotel, PA Circa 2001-2007 Reunites, Palawan, Philippines’ monsoon tragedy, Puerto Princesa Underground River Oracle Developer Day 2012 at the Crowne Plaza Hotel, Regine Velasquez-Alcasid lost her voice during her Silver concert at the MOA Arena, Road tripping Tagaytay and Alabang Town Center, Rody Vera, Si Agimat, SIM Committee - The Dark Knight Rises, Team Philippines (Smart Gilas) Champion during the 34th William Jones’ Cup, The Ideal Packaging, TheUnspoken acoustic band, TheUnspoken was so blessed to have another gig at Vivere Hotel, Visita Iglesia, West EIT Corporation Team Building at Padi sa Morong, West Idol. Bookmark the permalink.