Hello readers! I apologize for not updating this blogsite for quite sometime because yours truly is simultaneously pre-occupied with so much things (Yes, I’m guilty! My bad!). I, myself, am wondering how I could squeeze them all up in less than 24 hours. I believe that it’s because of the unselfish strength and grace that our Supreme being has given to me.

Anyway, fresh from last Holy Wednesday, I was able to have my Visita Iglesia for this year. I just took the opportunity of being half day in the office after our sumptuous lunch with our Project Director and our VP. The churches that I have chosen to visit are located in different parts of Metro Manila. They are not just rich in history but indeed the places worth visiting as well.

Churches That I Visited Around Metro Manila 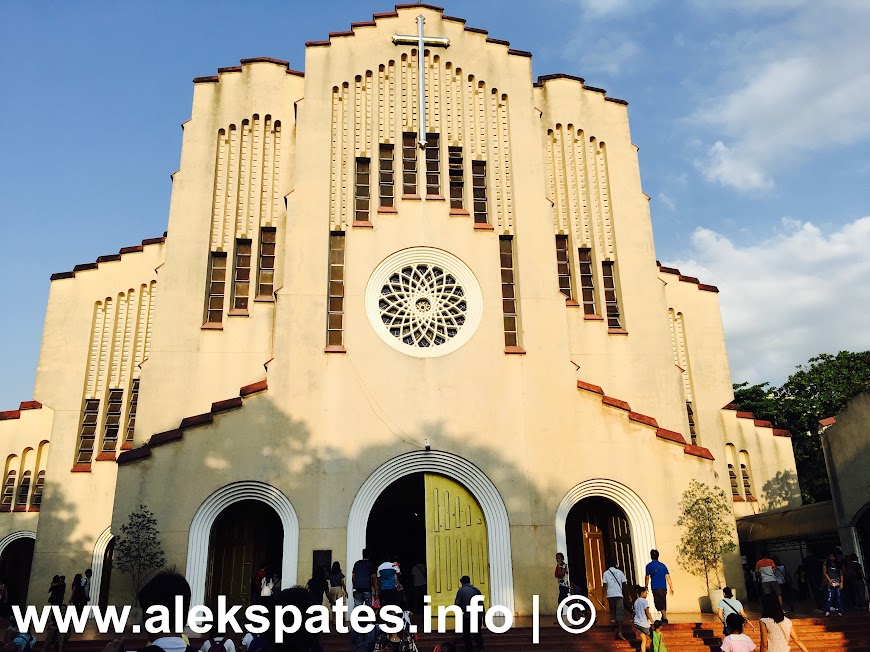 From Greenbelt 3, Makati, I started travelling at around 3:30PM. I rode the MRT 3 Train from Ayala Station going to Taft Avenue Station. At this moment, I noticed that as compared with the South Bound platform, there were more people going to the opposite bound (North Avenue). I believe, most of them left their offices early to catch up their respective trips going to provinces to spend Holy week with their families.

After I reached Taft Avenue Station, I walked towards LRT 1 EDSA Station. Thank you for the BEEP card because we are only keeping one card across LRT 1 & 2, and MRT 3 (And even for P2P Buses, and E-Jeepneys in Katipunan).

From Baclaran Station, it took me around 10 to 15 minutes of walking towards the National Shrine of Our Mother of Perpetual Help which is the first Church I visited. As expected, there were plenty of people inside and outside the church. Some was having the station of the cross, others were just participating to whatever activity that the church has to offer. It’s almost 5:00PM when I finished my prayers. 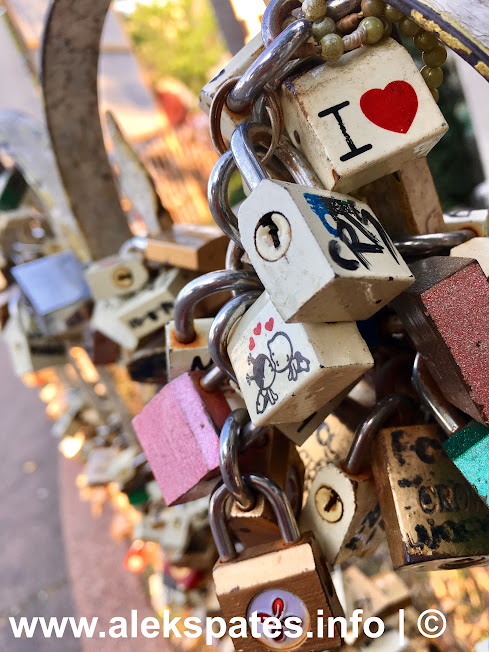 “Some call them love locks, others call them faith locks.” Just outside Baclaran Church, a grotto where fence with padlocks can be found, another way for people to display and declare their undying love, with God as their witness.

Malate Catholic Church (a.k.a. as Nuestra Señora de los Remedios) was the second church that I visited. From Baclaran Church, I returned to LRT 1 Baclaran Station, and I searched for the LRT 1 station where this church is nearby. I went down to Quirino Station, and after another 10 to 15-minute walk, I was able to find Malate Church. 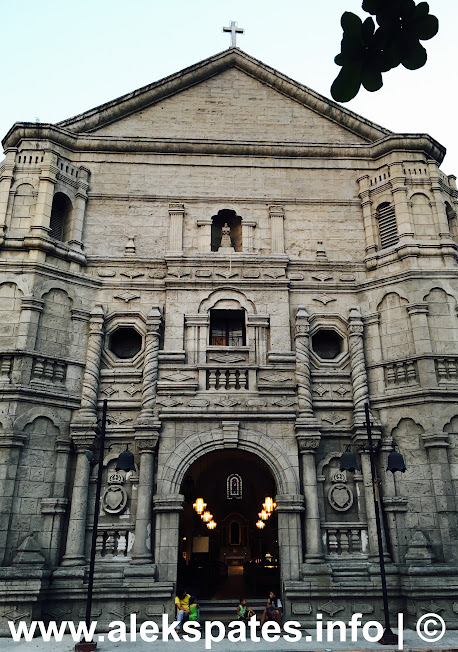 When I arrived there, I saw a group of people currently having their Station of the Cross in Filipino language. As much as I would want to pray with them, I didn’t do it because they were almost done. I just had the Station of the Cross alone. At first, it was a challenge for me because they were praying in chorus using a PA system but I focused instead to cope with it. 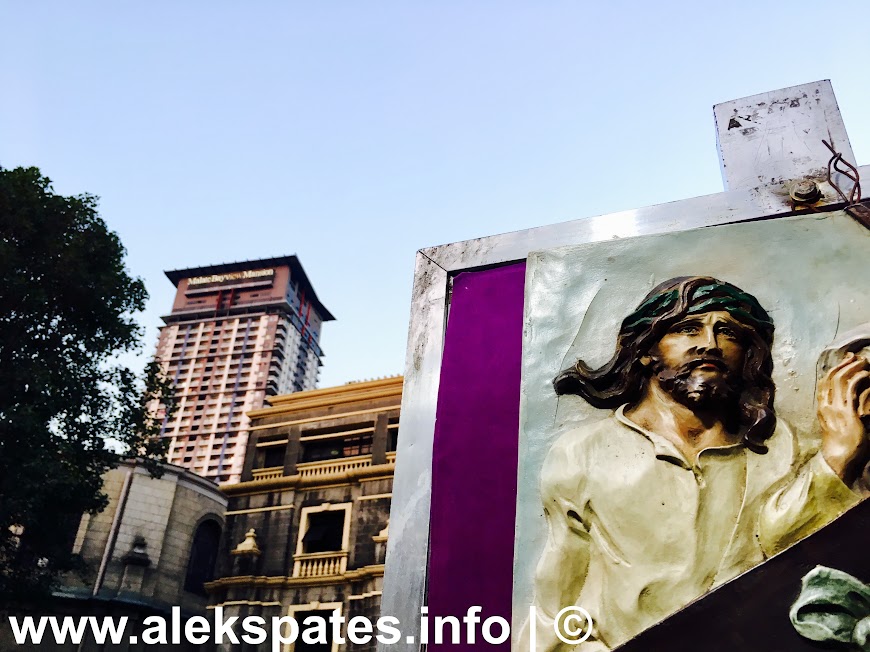 Malate Church can be found in front of the Manila Bay in Roxas Boulevard and surrounded by some tall buildings. 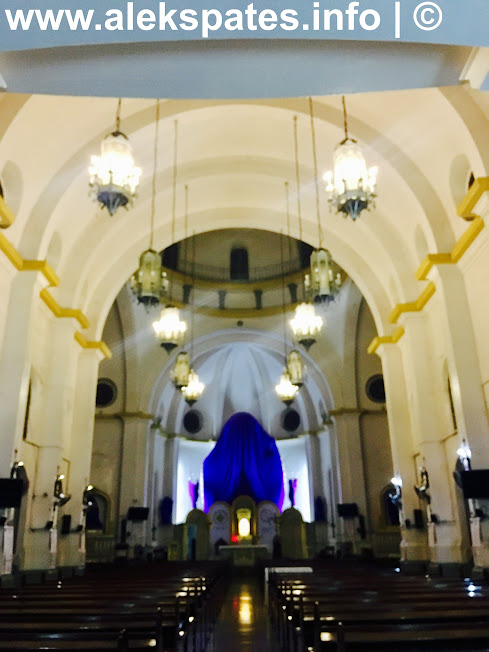 I accidentally went to this church because San Sebastian Church was supposedly the third church in my list. From Malate Church, I rode a Jeepney going to Quiapo, and I went down to Manila City Hall. Just a few walk, you can see another set of Jeepneys (alongside SM Manila) that says “Legarda / San Miguel / San Sebastian.” However, at first I wasn’t able to ride this because I took the Jeepney that I saw in front of the mall which I thought has the same route. I even asked the barker if the route was going to R. Hidalgo Street, he paused for a second, and confirmed. 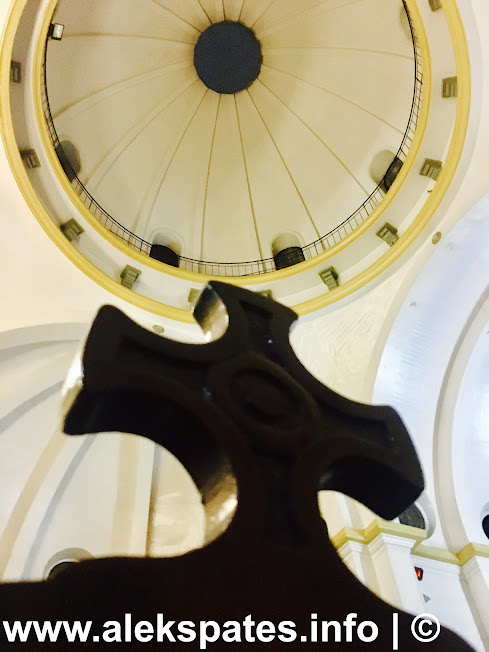 However, on our way, I noticed that it’s taking a different route so I instead ended up visiting Saint Vincent De Paul Parish located beside Adamson University, it was passed 6 o’clock in the evening then. The church was still open but aside from me, only two more people were praying inside, and it was really quiet. I was only hearing myself while praying, including the cars that passed by outside. 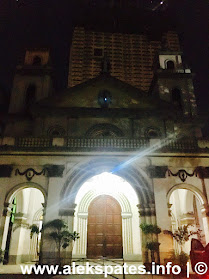 Located at the back of Saint Vincent De Paul Parish is the famous photobomber building, Torre de Manila. It doesn’t only messed up Rizal Monument view in Luneta but even this parish. 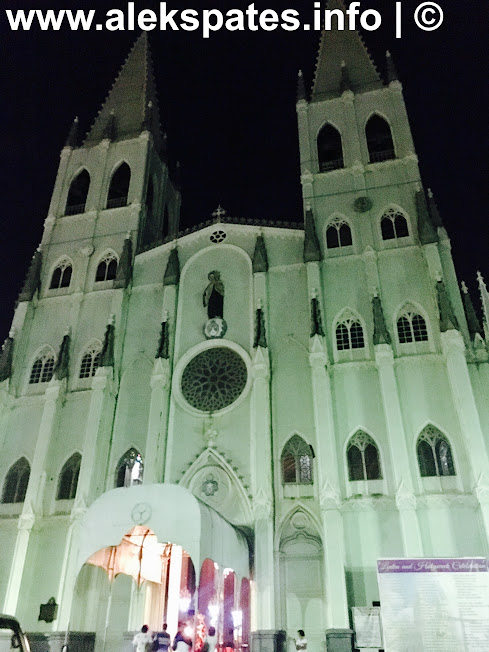 At last, the fourth church I visited, the San Sebastian Church. From Saint Vincent De Paul Parish, I walked along San Marcelino going to the side of SM Manila where the Jeepneys can be found. I arrived passed 7 o’clock in the evening. The Stations of the Cross were located at the parking area of the church in front as well of the Saint Rita College. 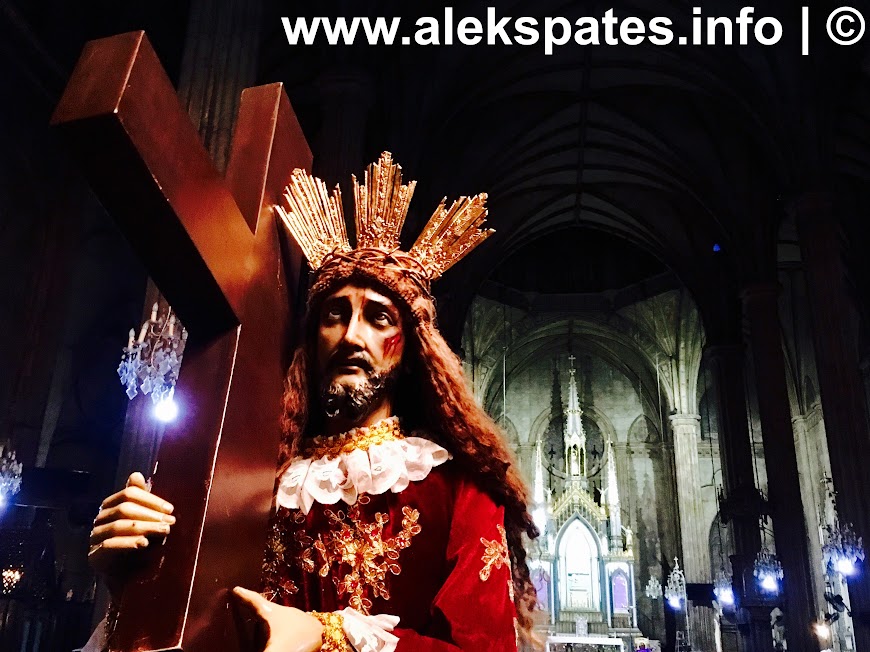 While praying, I can still feel the humidity of the summer breeze even if its already evening, but it’s much better than the afternoon scorching heat of the Sun. 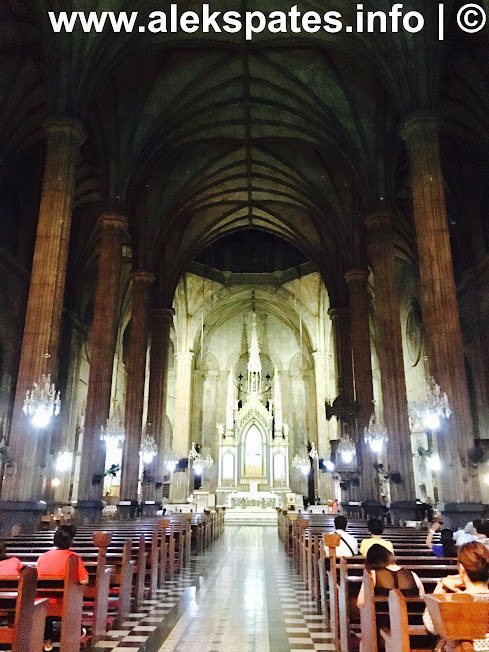 San Sebastian Church is known for its Gothic architectural feature. It is the only all-steel temple in the Philippines, and the only prefabricated steel church in the world.

5. Minor Basilica of the Black Nazarene (a.k.a. Quiapo Church) 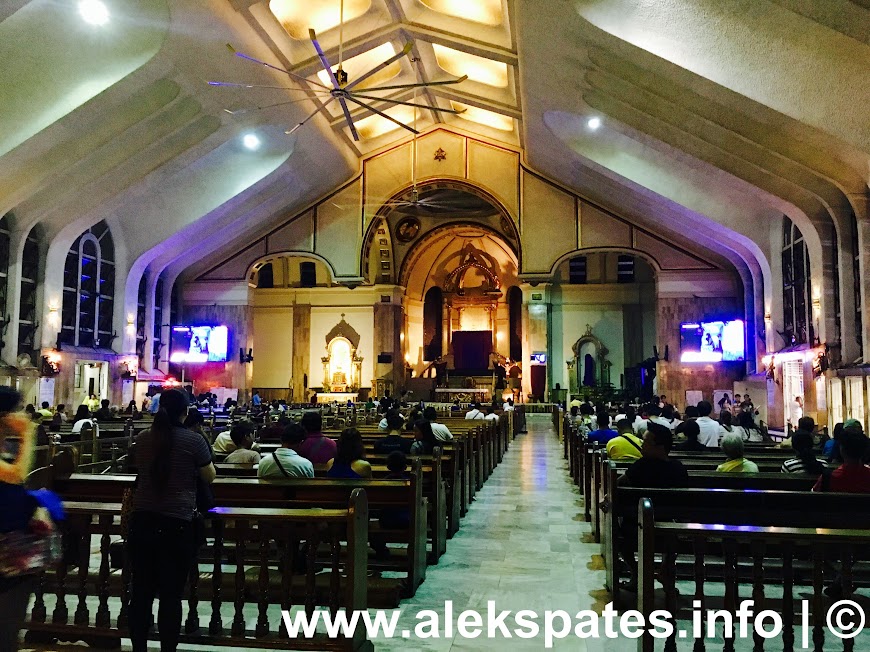 The fifth church that I visited is canonically known as Saint John the Baptist Parish but it is famously known as Quiapo Church. From San Sebastian Church, one can go to Quiapo Church by passing through R. Hidalgo Street going to Quezon Boulevard, then taking the underpass. Some of the landmarks includes Nazarene Catholic School, and Manuel L. Quezon University. While walking, I passed along one of the oldest bakeshop in Manila, the Bakerite which was erected since 1946. I bought breads and pastries for take home because we’ll eat these for our fasting.

Unlike the previous churches that I visited, Quiapo Church is a very busy temple. When I arrived there, a Lenten Play (Cenaculo) was currently being shown outside the church, and it was being projected on the big screens inside the church. One can easily get distracted from these but if you only concentrate on the purpose of Station of the Cross, you can get use to it. 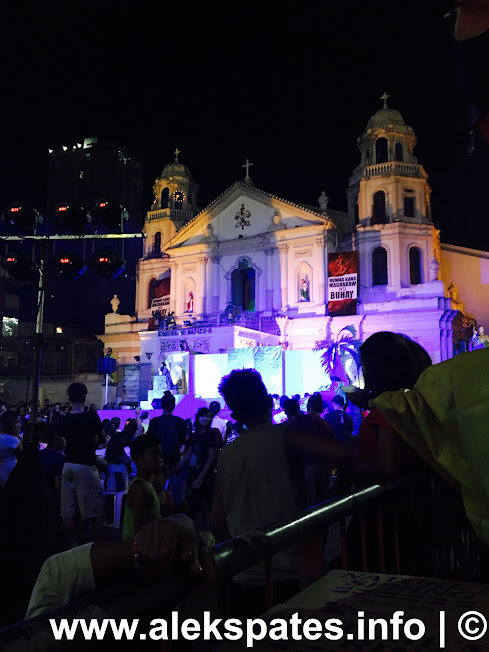 The Agony in the Garden scene. The Lenten Play (Cenaculo) was presented live in front of the Quiapo Church in the evening of Holy Wednesday. 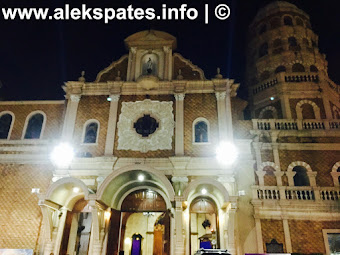 Located just a few steps away from Quiapo Church was the sixth church that I visited, the Santa Cruz Church. It was built when the arrabal (suburb) of Santa Cruz was established by the Jesuits in the early 17th century. 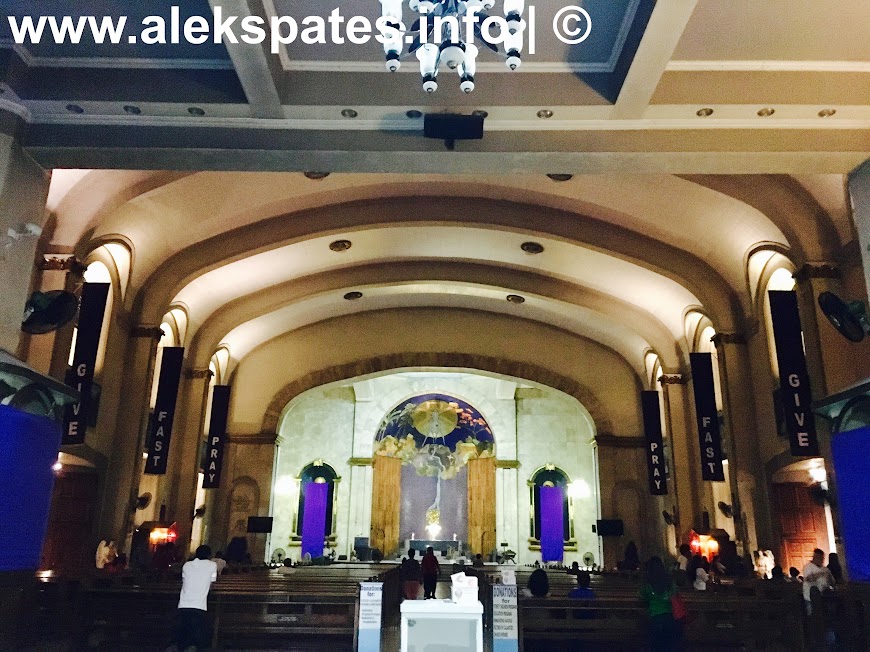 Around 8:30PM, and while having the Station of the Cross, a group of cyclists dropped by in front of the church, and said a prayer silently. They took a group photo with the church as their background. I don’t know but may be, it’s their way of Visita Iglesia: losing weight, and reflecting at the same time. 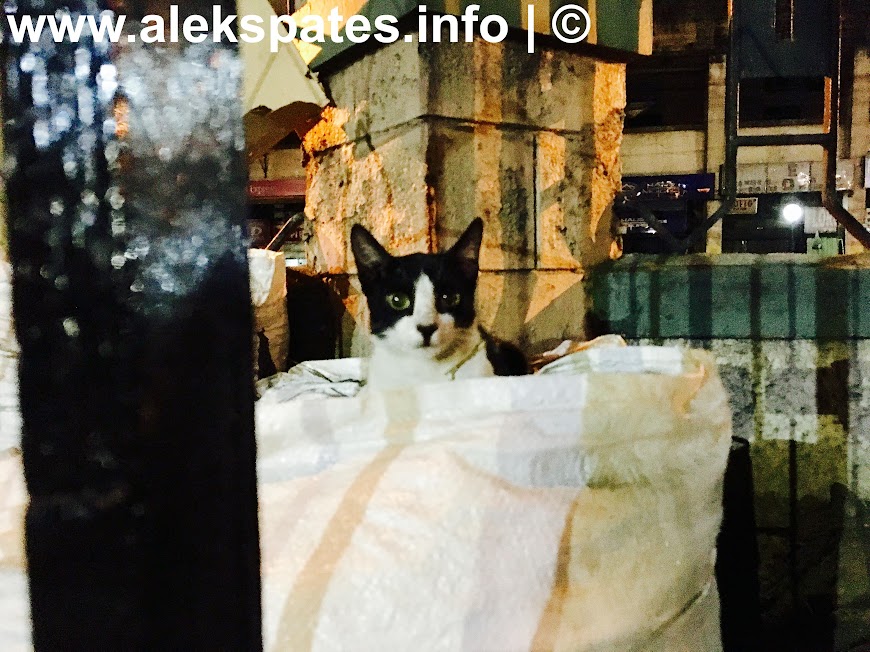 While praying, this lovable cat which looks like my adopted kitten, Pepita, stares at me. How cute is that! 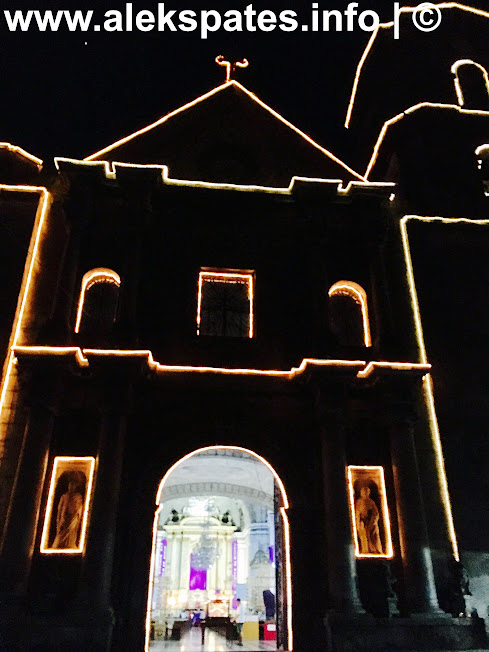 It was 9 o’clock in the evening when I arrived at San Agustin Church, the seventh church that I visited. This is a 446-year old church as of year 2017. Supposedly, I was planning to visit Minor Basilica and Metropolitan Cathedral of the Immaculate Conception (a.k.a Manila Cathedral Church), to conclude this year’s Visita Iglesia but they were already closed. Thank God, San Agustin Church was still open.

Just like the previous churches that I visited, their Stations of the Cross were placed outside the church. This is to accommodate more Catholics during the day. 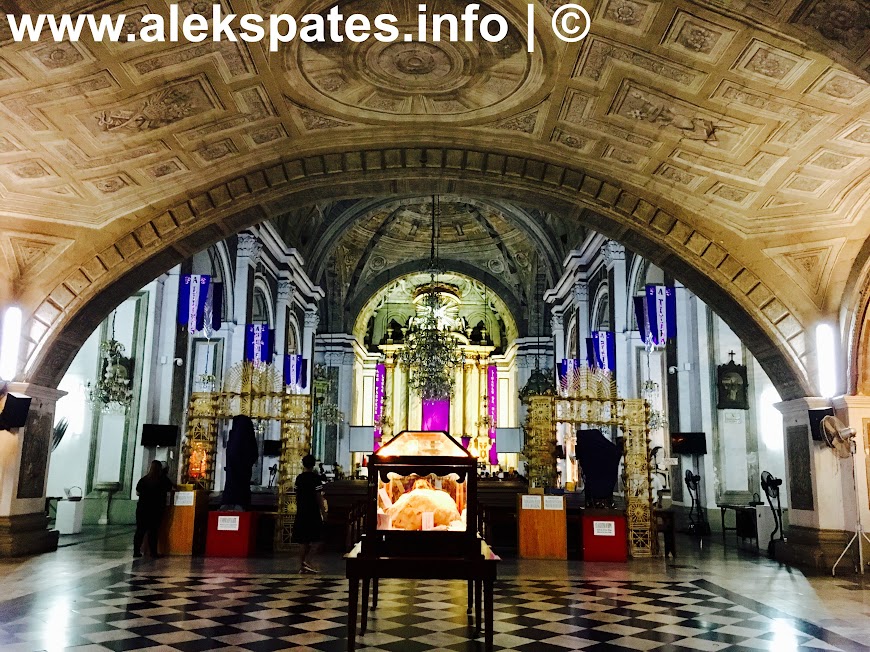 I finished my Visita Iglesia at around 10 o’clock in the evening. Before I went home, I bought some instant noodles at 7-11 beside Manila Cathedral for our fasting until Black Saturday. 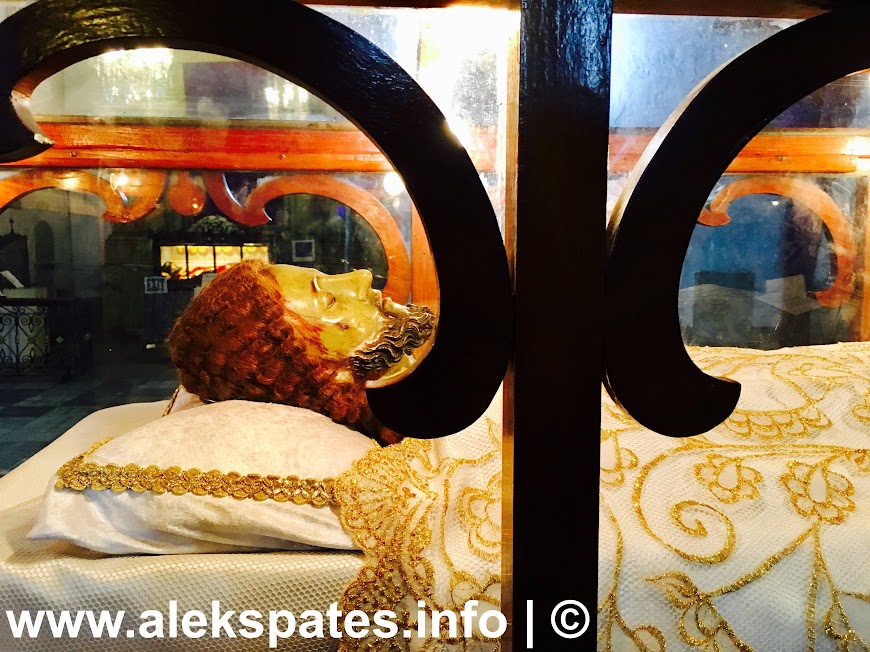 I don’t own a car. I know most of you are thinking that it is very difficult for someone to do Visita Iglesia. But isn’t that the essence of the activity? Our own sacrifice to feel the Station of the Cross journey even if these sacrifices aren’t even closer enough to what Jesus Christ have actually experienced. For me, I believe that the more hardships we experience, the more it is effective as a member of the Catholic Church. Of course there are exemptions for believers who have serious medical conditions, senior citizen, have small kids, etc., and most likely, they can do this activity in their own comfortable way depending on one’s faith and devotion. You still have time until Good Friday to participate in the Station of the Cross.

When you are committed to something or to someone, and that commitment is genuine, then hardships and challenges won’t even matter! (AAP)