The Philippines is the only country in South East Asia where majority of the people are Roman Catholic. If we are going to trace back the richness of our history, the Spaniards led by the Magellan’s Expedition brought it to us in the early 15th century. Since then, Christianity has spread all over the country.

Two weeks ago, we have celebrated holy week, an event which is considered to be sacred and ‘holy’ (from the word itself) especially to Catholics. Every year in the observance of this important event, the government declares for a long weekend starting from Maundy Thursday up to Easter Sunday. As a Catholic, I didn’t just observe the celebration but I was able to actively participate in every activity that the church has to offer.

As part of the tradition, we have the so-called Visita Iglesia, an activity where the Catholics should visit at least seven churches so that they can pray and reflect through the Station of the Cross (a 14th station ritual about the sufferings of Jesus Christ before, during and after His crucifixion). If we will strictly follow what the activity should really be, then we need to visit 7 new churches: new in such a way that you haven’t been to that church before.

This activity is performed during Maundy Thursday or Good Friday. In my case, I was able to have it on Maundy Thursday. I started at around 8 o’clock in the morning after my night shift job. I went first to the famous Redemptorist church in Baclaran. Most of us only knew this as Baclaran church but the actual name of the church is National Shrine of Perpetual Help.

Although it was still early during that time, the people however started to pile up in each of the stations to have their respective Station of the Cross. I spent 1 and a half hour to finish the session and I proceeded to the next church which is just 30-minutes away.

The second church that I’ve visited is beside the famous mall in Pasay. One may say it’s the MOA church because of its location, but the actual name of the church is Shrine of Jesus, The Way, The Truth And The Life. 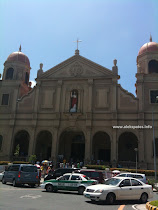 Shrine of Jesus, The Way, The Truth And The Life, Pasay

Unlike the first church, this one is new (not more than a decade old) since it was only erected last 1999.

National Shrine of Our Lady of Guadalupe, Makati

National Shrine of Our Lady of Guadalupe was the third church I visited. It is commonly known as Guadalupe church and it’s just a walking distance from Guadalupe MRT station. The location of the church is quite unique because it was erected in a slope terrain. 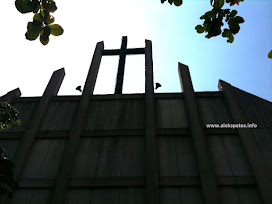 I was half-way with my Visita Iglesia when I visited Mater Dolorosa Parish located at East Rembo, Makati. This church was established in 1987. 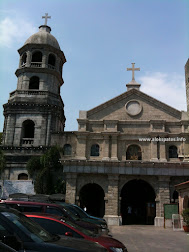 As part of the journey, I was able to visit one of the oldest churches in Metro Manila, the San Roque Parish (Diocesan Shrine of Santa Maria). Erected in 1815, this historical church is located in Pateros, the small city known for its duck-raising industry especially for producing balut. 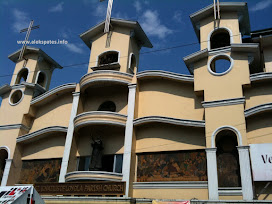 Despite of the scorching heat of the sun, it didn’t stop me to go to St. Ignatius of Loyola Parish Church, which marked the sixth church I visited. This small yet solemn church is located beside Ususan Elementary School of Taguig City. 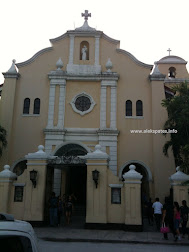 It was already passed four in the afternoon when I arrived at Santuario De San Antonio Parish in Forbes Park, Makati. This was the last of the 7 churches in my line up and I was really fulfilled. During that time, I already felt the tiredness of my body physically but in contrast, I felt something different spiritually. It’s a feeling greater than the satisfaction brought by eating your favourite food or buying the latest Apple gadget. 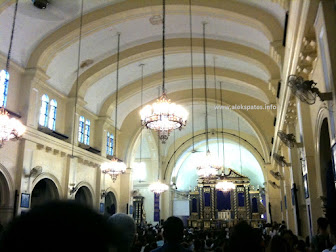 One thing I observed though during Visita Iglesia is that, most of the people sometimes don’t really pray and reflect seriously when they are having the Station of Cross, and instead they are just reciting it as if there’s a race behind: the faster they recite, the quicker they finish it. Thinking that the more church they can afford to visit equates the amount of their faith to God, which I think really doesn’t make sense at all. How about its solemnest?

I don’t know if it’s only me but when I reflect, it usually takes an hour or so, to meditate wholly. Well, we have different perception of faith but I am pretty much sure we only believe in one God above. Now that’s a fact! (AAP)

Engr. Aleksandre Pates (a.k.a. Aleks or André) is an I.T. Professional and Electronics Engineer by profession, but it didn’t hinder him to enrich his skills and broaden his experience in theater and literary. He is also a College Instructor/Professor, Playwright, Artistic/Creative Director, Singer, Songwriter/Composer, Resource Speaker/Lecturer of Campus Journalism, Editorial Writing, Creative Writing and Leadership Empowerment for Youth. He is a Palanca Awardee, and he was the Editor-In-Chief of The Philippine Artisan (official student publication of TUP-Manila) from 2003-2007. He is a Certified Oracle Partner Expert since 2010, a Certified Harvard Connected Manager, and a member of the prolific playwright organizations in the Philippines, The WritersBloc. He also holds numerous positions in socio-civic and professional organizations like Institute of Electronics Engineers of the Philippines (IECEP – Manila Chapter), FEU Institute of Technology, and De La Salle Araneta University Alumni Association, Inc.
View all posts by Aleks →
This entry was posted in Religion and tagged Baclaran Church, Baclaran Church Philippines, Baclaran-Pasay Church, Guadalupe Church, Mater Dolorosa Parish, National Shrine of Perpetual Help, Perpetual Help Church, Perpetual Help Church Baclaran, Philippine Churches, Redemptorist Baclaran, San Roque Parish, St. Ignatius, Visita Iglesia. Bookmark the permalink.